Tibhar Evolution MX-P is the most popular Tibhar rubber on the market. It is hailed as one of the closest Tenergy 05 alternatives available and costs considerably less than Butterfly’s top rubbers. Here is a review I wrote back in 2015 on the rubber for Expert Table Tennis. 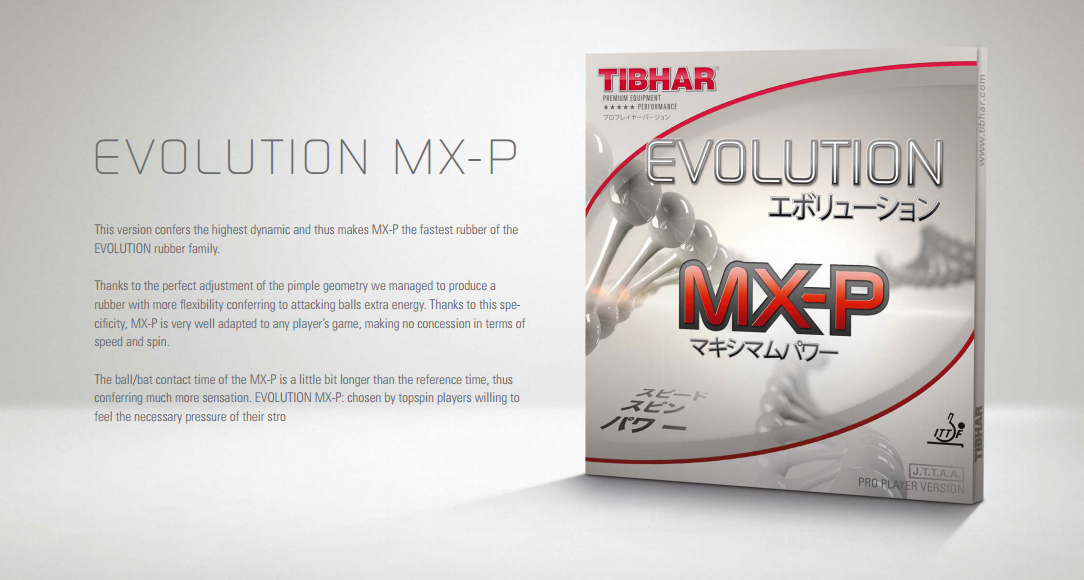 As a junior, I played with a number of Stiga rubbers, but they have been a big let down over the past five years and it’s only recently that they have started to get their act together again with the Airoc series. The German ESN tensor rubbers (such as Bluefire by Donic) are all pretty good, but in my opinion, not quite up to scratch with Tenergy. So, a couple of years ago I all but gave up my search for a cheaper alternative and accepted that I would be paying £50 per sheet of rubber for the foreseeable future.

Then, in a podcast interview with England’s #1 Paul Drinkhall, I was introduced properly to the Tibhar Evolution MX-P rubber. Paul signed a sponsorship deal with Tibhar and Bribar Table Tennis back in March 2015 and I have to admit I was skeptical that he’d have moved away from using Tenergy.

Butterfly Tenergy rubbers are used by the majority of professional players and it isn’t unheard of for a player to claim publicly to use their sponsor’s rubber whereas, in fact, they are secretly using Tenergy. I had a sneaking suspicion that Paul might still be using Tenergy rubbers, unable to break the habit of 7+ years.

That wasn’t the case, though. Here’s what Paul had to say…

“A lot of people ask me, “Are you still playing with Tenergy?”, and when I tell them I’m using the Evolution MX-P they sort of laugh and look at me as if I’m lying, but I don’t see the great issue.”

“I think it’s a little bit of a mental thing. If you give a player a rubber, with no branding on it, and said, “This is Tenergy”, they’d immediately think the rubber was good.”

“As soon as a signed with Tibhar I changed to the MX-P and I didn’t really feel much difference and actually, I prefer it to Tenergy. I quite enjoy the look on people’s faces when they’re playing with the Tenergy and they see that I’m playing with MX-P and I’m beating them.”

“Both me and Samsonov play with it, so hopefully people will open their minds a little bit and try it because it’s cheaper and it’s just as good, if not better.”

And, if you’d like to, you can listen to that interview in full here.

I’d heard a few good things about the Evolution series over the years but, having tried plenty of other Tibhar rubbers in the past, I wasn’t expecting it to be that similar to Tenergy. Speaking to Paul changed my mind, though. I knew that he wouldn’t be playing with anything less than a top-class rubber and I immediately wanted to get my hands on some Tibhar Evolution MX-P!

In the UK, Bribar Table Tennis is the main distributors of Tibhar products so I reached out to them to see if they could hook me up. They did. I had two sheets of Tibhar Evolution MX-P through my letterbox within a few days.

I’ve been using them for ten weeks now – world’s longest rubber test?! – but I absolutely love them and I’ve finally found the time to write up my thoughts and, hopefully, turn a number of long-time Tenergy users to MX-P fans.

Before I get started, I’d just like to say that Bribar currently has Tibhar Evolution MX-P rubbers on sale for £34.50 a sheet. This is an absolute bargain and considerably cheaper than Tenergy 05 – which is £44.99.

Bribar also has a brand new website (which looks really good) and have a special offer where you can buy Paul Drinkhall’s exact bat (Drinkhall Power Spin Carbon blade  with Evolution MX-P rubbers) for just £124.99.

Basically, check them out! They are going above and beyond with their offers at the moment.

What I’ve realised, since rediscovering the Tibhar Evolution rubbers is that “Evolution” is Tibhar’s version of “Tenergy”. Obviously, they don’t explicitly state that anywhere, but it’s abundantly clear.

Tibhar love their Evolution series of rubbers so much that they’ve given them their own mini website!

Tibhar Evolution MX-P is the Tenergy 05 of the series. It’s the fastest, has great spin, a fairly hard sponge, and suits a close-to-the-table topspin game.

As I open the packaging it all looks very good.

My Tenergy 05 rubbers are now lying loose in my bat case while the MX-Ps are firmly attached to my blade (and my heart – awwww).

I could break down the speed, spin, control, durability etc.  – but who really cares about all that? The takeaway is this…

MX-P is pretty much identical to Tenergy 05 and much cheaper!

If you’ve been playing with Tenergy 05 for years, and would like the same quality of rubber for £10+ less per sheet, you need to make the switch to Tibhar Evolution MX-P. I have switched, and I can’t see myself going back.

This is what I’ve been looking for for all these years – a rubber that can truly replace Tenergy – and I’ve finally found it.

I wasn’t going to bother with this bit, but I know that some of you enjoy this kind of thing, so here goes…

And this is what Tibhar have to say about their rubber. Every brand has a different system – so it isn’t that helpful, but it looks pretty!

TableTennisDB is always a good place to check if you want to read honest reviews of table tennis equipment written by players from all over the world. Here are a few reviews from users on there…

“The best Tenergy 05 alternative for me.” – marcbackhand

“Can’t add more than below comments. Better than Tenergy 05.” – qvoliszz

“A couple of pros in my club have changed from Tenergy 05 to this.” – OlleOst

I never thought I’d say it. I had all but given up hope. But here it is. A Tenergy 05 alternative that is everything I’ve spent the past five years searching for.

I would like to say another big thank you to Bribar Table Tennis for providing me with the rubbers to test and review. Thanks, guys!

You can buy Tibhar Evolution MX-P rubbers from Tabletennis11.com. They have great prices and offer free shipping worldwide on orders over €70.

Have you used Tibhar Evolution MX-P rubbers yourself? What did you think of them? Please share your experiences and leave a review below in the comments.