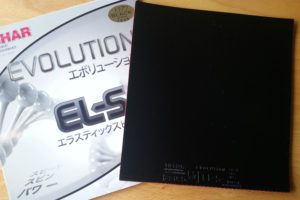 Much has been said about the EL-S rubber and a lot of people who have tried it have been comparing it to the Butterfly Tenergy 80 rubber. The EL-S has a lighter color compared to the EL-P and the sponge of the EL-S has bigger pores.

The Tibhar Evolution EL-S is a great improvement over its young brother, the EL-P. The EL-P had complaints from players in the past. I used it when it first came out and in comparison, the EL-P sometimes lacks the bounce and feels dead when you are hitting the ball. This is the common complaint of those who have used it.

The EL-P has good speed when you first use it however after a few weeks you can see a great decline in both bounce and spin. Other players swear that it lacks the speed. The spin is very good and it is unanimously agreed that the EL-P is a very spinny rubber but lacks the punch. The FX-P and MX-P are different because they are very bouncy. The EL-P at best can be compared with the MX-S in terms of speed but a notch or two above it.

The Tibhar Evolution EL-S is such a great improvement wherein the rubber now is very bouncy and fast while maintaining the spin of its predecessor. In fact, it is even spinnier when you attack with it.

If you compare the speed of the EL-S to other rubbers, I would say it is as fast as a Donic Bluefire M2 but feels harder on the impact of the ball. It is also as fast as Tenergy 80.

For smashing high balls, the EL-S feels a lot better compared to the EL-P wherein when you hit the ball and compress it against the sponge, the spring and bounce are there and you can really smash well with the said rubber. Even though it is fast, the control is there. 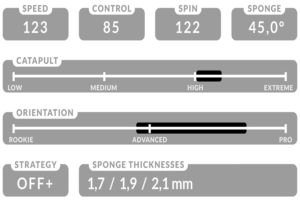 In terms of spin, the EL-S is very spinny and almost the same level as the MX-P but in stronger shots, the MX-P is still spinnier. The EL-S spin is still below the level of Tenergy 05 but is pretty close to it. The EL-S produces a very heavy underspin when you are doing spinny pushes or serving with it.

The topsheet is almost tacky and is very grippy at the same time. It is ideal for doing drop shots because the ball handling is quite good. You can also do flicks against short balls and seldom have errors with it.

Most of all, when attacking with loops or loop drives, the EL-S is already satisfying in terms of spin and its good speed. It is even better compared to the Donic Acuda series. It’s like you merged the Baracuda with its spin and the Bluefire M2’s speed but it has more to offer. It also has a better feel and control.

Overall, this is one amazing rubber wherein it is controllable but at the same time the spin is great and speed is sufficient enough for players wanting an attacking rubber. It is indeed a great alternative to Tenergy 80 or 05 due to its lesser price.

You can buy Tibhar Evolution EL-S rubbers from Tabletennis11.com. They have great prices and offer free shipping worldwide on orders over €70.

If you enjoyed this Tibhar Evolution EL-S review, you might be interested in reading Ben’s popular article Tenergy 05 Alternatives & The Best Table Tennis Rubbers, which is available on his Expert Table Tennis blog. And don’t forget to check out all of our other Table Tennis Rubber Reviews as well.

Have you used Tibhar Evolution EL-S rubbers yourself? What did you think of them? Please share your experiences and leave a review below in the comments.