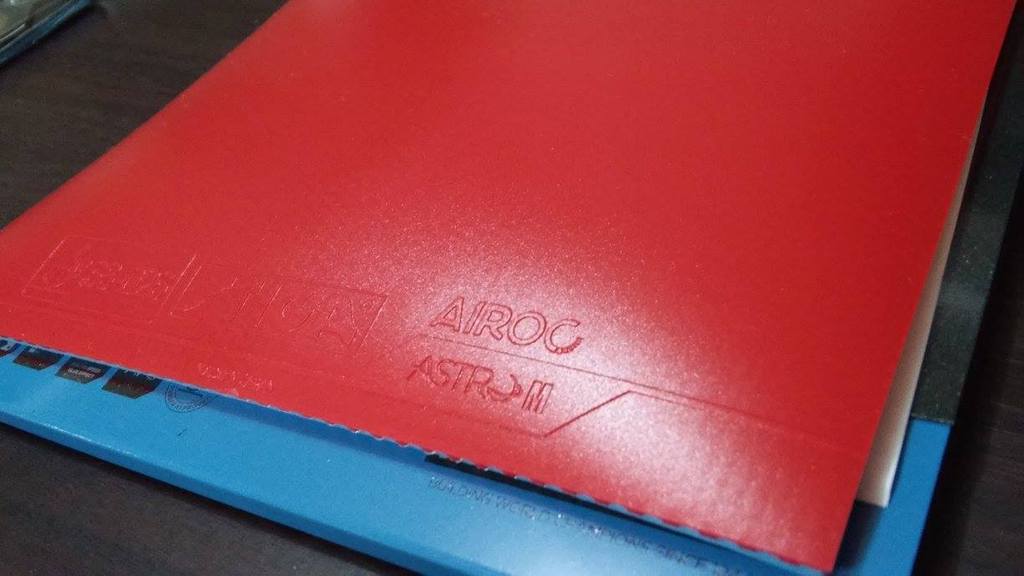 I have to admit that I haven’t used Stiga rubbers since the 2010/11 season. As a student, I was fed up of paying so much for Tenergy 05 and decided to try out Stiga Calibra LT. Unfortunately, I really didn’t like them and reverted back to my old Tenergy instead. I feel like a lot of players have had similar experiences with the Stiga rubbers of late because I don’t know many players in the UK who use them.

From what I can tell, Stiga are trying with the Airoc series of rubbers, to create something that plays more similar to Tenergy or ESN Tensor rubbers. By that I mean; quite fast, good spin and a medium to high throw angle. That’s the kind of thing I’m after, and that’s why I was so excited to try the Airoc Astro rubbers.

The packaging is really nice (if that’s the kind of thing you’re into). I only say that because I really dislike the design work on a lot of table tennis rubbers – too many colours and patterns – but Stiga have done a really good job with Airoc Astro. 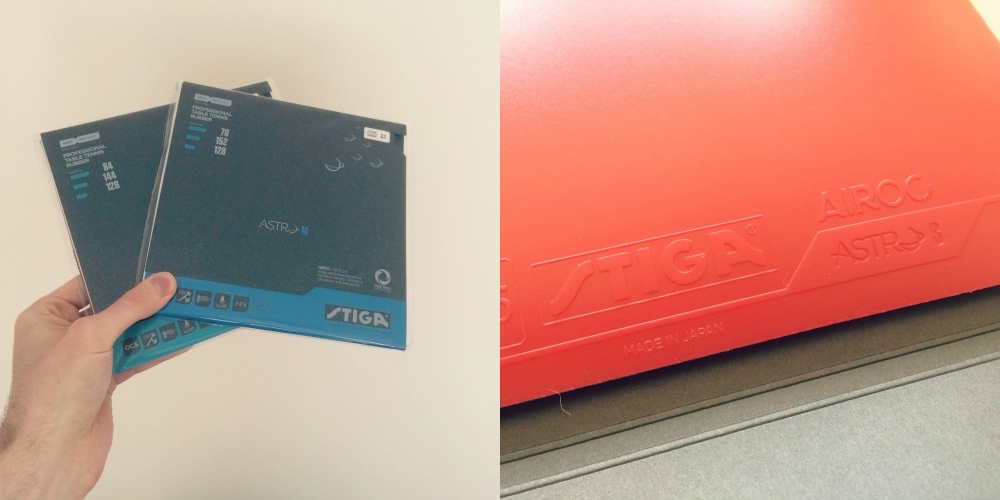 The rubber has a blue sponge and is made in Japan. It has a lot of “stuff” too; Oxygen Capsule System, Trans Tension Sponge, Built-In Speed Glue Effect, Long Trajectory, and APS Technology. I have to admit, I’m not sure what all of that means, but it sure gives you the impression that a lot of work has gone into the research and development of these rubbers!

I have been playing with the Stiga Airoc Astro rubbers on my Timo Boll Spirit blade for the past couple of weeks and while I don’t think I will be switching away from my beloved Tenergy 05 just yet I was really impressed with them. Stiga have got much closer to what they should be producing.

As I am used to playing with medium-hard rubbers, I was most looking forward to trying out the Airoc Astro M. The speed was good, the spin was okay and the rubber gave a fairly high arc when looping. I was pretty satisfied with it.

The one problem I encountered was pushing. I kept pushing everything into the net! I’m not really sure why but if I went for a push, using the bat angle I would use when playing with Tenergy, the ball seemed to stay really low. The same thing was happening with backspin serves and I put a few of them into the net. I think this was all just adjustments that needed to be made when using the rubber because the next time I used them I didn’t notice this anywhere near as much.

I do get the impression that spin still isn’t perfect with the Stiga rubbers, but these seem to be much more suited to loopers than previous rubbers (like Calibra) which were super fast and great for hitters, but struggled with loops and open-ups.

Overall, I would give Airoc Astro Medium 7/10. It is a good rubber but still a little way behind Tenergy, in my opinion.

It’s great to see Stiga moving in the right direction and they have now produced a rubber that the majority of Tenergy users could play with (with a few adjustments) without noticing too much difference. It has taken brands like Stiga about five years to catch up with Butterfly but it appears that they are making strides now.

Stiga Airoc Astro is best when used a step away from the table for looping. It really excels on these types of stroke and in particular open-ups where you allow the ball to drop just a bit before contact. If you are the type of player who likes to take your time and take the ball a little after the peak of the bounce then I think you are really going to enjoy these rubbers.

Stiga Airoc Astro was weakest on counter loops and anything off-the-bounce. It just didn’t seem to give you the same feeling and consistency as something like Tenergy. I felt like I couldn’t trust it 100% to do what I wanted it to do when I was taking the ball early.

I also had a few issues with backspin. I put a lot of pushes into the net, I found touching a bit of a struggle, and had similar problems working out the correct bat angle for serves. This got better over time and as I got used to the rubber but I don’t remember ever having these kinds of issues when first trying out Tenergy.

You can read my review of Stiga Airoc Astro S here.

If you have used Stiga Airoc Astro M yourself and have anything to add to this review, please leave a comment below.