A few months ago I was fortunate enough to be contacted by Laszlo Peli, co-founder of OSP Blades. I hadn’t heard of OSP Blades before he sent me an email but ever since I have been following the brand with interest. 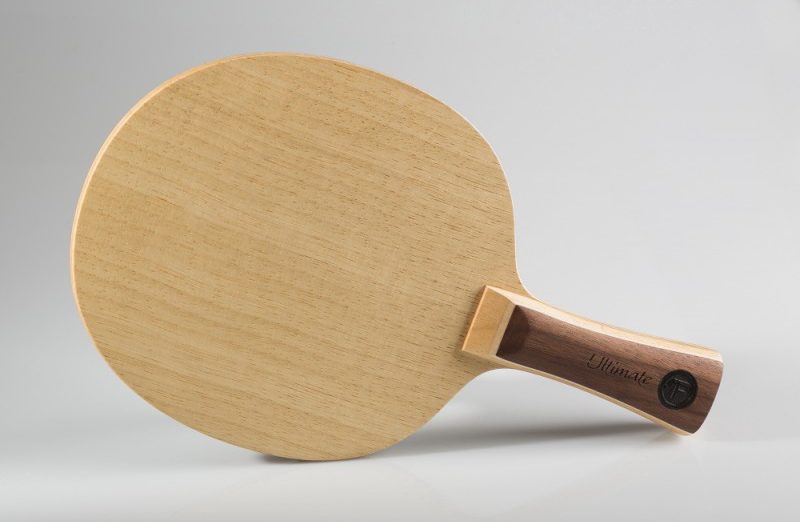 They were kind enough to send me a couple of their best-selling offensive wooden blades to test and review (I have reviews for the OSP Ultimate and OSP Martin blades coming soon). But today I have something a little more special. The guys at OSP Blades have been working on a new carbon blade and I have one of the prototypes to try out and review! Introducing… the OSP Ultimate 3CRW!

As a long-time Timo Boll Spirit user, this was exactly the type of blade I had been looking for. I played with the OSP Ultimate blade a few weeks ago and, although I really liked it, I found it a little slow for my liking. Could the OSP Ultimate 3CRW be the answer?

Before I get into the review, here’s a quick introduction to OSP Blades…

OSP are a really cool brand that specializes in making handmade table tennis blades. The quality of their products is incredible, they look amazing, play great, and you even get sent a data sheet full of information about your specific blade with every purchase.

I showed my OSP Ultimate 3CRW blade to a friend today and he was surprised to see three layers of carbon running through it.

“They don’t make carbon blades, do they?”

Well, despite not offering any carbon blades for sale on their online store, it turns out that OSP have been experimenting with carbon for about three years now. They would sometimes make carbon versions of their current blades at the request of customers and have been fine-tuning the manufacturing process. All of the top players that use OSP blades use custom-made carbon versions of their favourite.

Now the company are ready to take the plunge into carbon blades on a much larger scale and the OSP Ultimate 3CRW is likely to be the first of many new carbon-wood blades. You can expect to see the Ultimate 3CRW on sale by November 2015 and it is expected to be sold at a 20% premium to the non-carbon version. That would make it about €115 (which is roughly £85 or $130). Not bad when you compare it to a Timo Boll Spirit which is £95.99 at TeesSport.

Here is what OSP had to say about their carbon blades…

“Making carbon blades was not difficult, we just experimented to find out which type of carbon collaborates well with our wood to provide the nice touch that is the cornerstone of the OSP philosophy. Now Robert (Palatinus) has made the building procedure so that he is able to reproduce the blades within the necessary standards.”

I have a feeling the new OSP carbon range of blades could become really popular! But now, let’s get into my review of the OSP Ultimate 3CRW blade.

The OSP Ultimate 3CRW is based on the popular OSP Ultimate blade. I have tried the Ultimate blade (review coming shortly) so I am in a good position to talk about the differences with this new carbon version. Both have a Limba outer ply.

Firstly, these OSP blades are immaculate and beautiful. The collection of photos below should give you an idea of just some of the handcrafted love and care that has gone into producing each blade.

The Ultimate 3CRW blade I was sent was a prototype and didn’t have all of the final trimmings on it, but it still looks and feels so smooth. The colours and patterns of the wood are incredible.

Aside from how good they look, these blades also have incredibly good feeling and touch for the ball. I was using the Ultimate 3CRW blade with two sheets of Tenergy 05 and it was so easy to play with. I was making very few mistakes but at the same time it gave me really great feedback in my hand when I went for bigger topspin strokes. I definitely preferred the “feel” of the blade to my Timo Boll Spirit. It is hard to explain but as the ball made contact with the bat I just felt like I had more of a connection in my hand. From what I know, this is a trademark of all OSP blades.

I had been a little disappointed with the OSP Ultimate blade simply because, to me, it wasn’t fast enough. As someone who is used to carbon blades, I found the all-wood Ultimate to not quite give me enough zip on my loops. The 3CRW version was great, though. It certainly isn’t an absolute rocket (some blades are soooo fast these days), but it gave me all the speed I needed to be able to play fast attacking table tennis. I would assume the Ultimate Tricarbon will be an OFF blade instead of an OFF+, but that is for OSP to decide.

The OSP Ultimate 3CRW had brilliant control. I guess this is similar to “feeling”. Some carbon blades are super fast but make it really difficult to control the ball, especially when blocking or during touch play. I didn’t have any of these problems with the 3CRW. Blocking is quite a big part of my game and I was able to block easily when during drills with my friend. I have used the original Ultimate blade for blocking and, as someone who is used to playing with carbon, it felt a bit alien to me. This Ultimate 3CRW blade was perfect, though.

I’m not 100% sure of the effect of the blade on how much spin you can create. As I said, I am by no means an equipment junkie and I have pretty much only used about 3-4 blades during my whole 15 years playing table tennis. Perhaps I can get the guys at OSP to educate me a little more about the effect their blades have on the players spin abilities. I will say though that, despite using slightly old Tenergy 05 rubbers, I was very happy with the amount of spin I was generating and couldn’t notice any difference in spin between the OSP Ultimate 3CRW and my Timo Boll Spirit that I had been using previously.

The arc of a blade describes its ability to get the ball up and down. Overall, I found that I didn’t really have to adjust when switching from my Timo Boll Spirit to the Ultimate 3CRW. The only time I could notice a difference was when going for low loops. I did find that the ball wasn’t coming off of my bat as high as I would have expected. This lead to me put a few loops into the net as I got to grips with the bat angle and contact point I needed to use. If you like blades with a super high arc then perhaps this one isn’t for you. I see that the Virtuoso blade has a high arc so perhaps a carbon version of that would be perfect for me?

The OSP all-wood blades are famed for their fantastic dwell time. They allow the ball to stay “on the racket” for a long time for helps you to have more control and generate more spin. For me, this is another one of those characteristics that I don’t think I have enough equipment experience to recognise. I will say though, that when using the original all-wood Ultimate blade I did feel like the ball wasn’t “pinging” off my bat so fast. I guess that must be the difference?

I weighed the blade with my two sheets of Tenergy 05 and it came in at 189g. My Timo Boll Spirit with two sheets of Tibhar Evolution MX-P is 190g, so no real difference there. I think some people might find that a little heavy but I’m used to it. Without rubbers, the Ultimate 3CRW weighed 95g, which is quite heavy. The original Ultimate blade weighed 93g, which isn’t that different. As I said, for me this isn’t really a problem but if you do prefer a really light bat then that could be an issue.

It’s great to see OSP taking the step into producing lots of carbon-wood blades. The majority of today’s top players use blades with carbon so it makes sense to incorporate it into their catalogue of products.

I really enjoyed playing with the OSP Ultimate 3CRW blade. It played really well, was plenty fast enough, and gave me all the control and feeling I required. I really, really like my Timo Boll Spirit blade (I’ve been using it for about 5 years now) but the transition from that to this one was pretty much seamless.

The big strength of the OSP Blades, in my opinion, is the wow-factor they produce. Having a handmade blade, made by an expert in Hungary is pretty cool. They also look absolutely beautiful and you can see that so much care and attention has gone into creating your blade. For me, that really puts OSP Blades above your typical, mass-produces blade from the big brands.

Is the OSP Ultimate 3CRW right for you? I guess that depends on the type of player you are, but I would struggle to imagine any carbon-blade-loving-player not enjoying this one. I also think that an OSP carbon blade is probably a good introduction to carbon blades, as you know that they will maintain the control and feeling of your all-wood blade while giving you the extra speed from the carbon.

“There is no ‘best blade’. There is only the blade that fits you best.”

And if you would like more information on selecting the right blade for you I am sure that Laszlo and Robert would be more than happy to chat to you and offer their suggestions based on your current set-up and style of play.