The Killerspin JET300 is the cheapest Killerspin ping pong paddle with red and black rubbers. It is the third paddle in their 8-part JET series. Here is our full review of the racket. 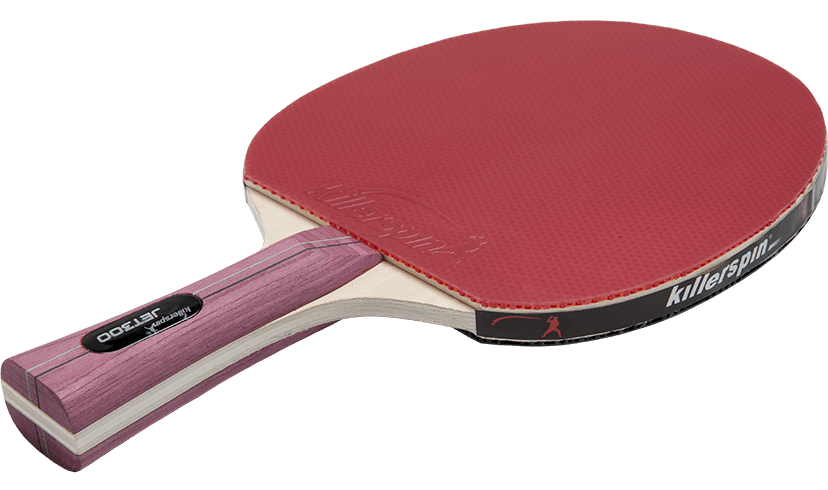 Killerspin is a fairly new American table tennis brand that has really focused on the recreational ping pong market. They have even labeled their bats/rackets “paddles” to appeal to the basement US audience. Their paddles aren’t cheap but they are well-made, and the best ones are actually pretty decent too.

The paddle features two 1.8mm Killerspin un-named “performance” rubbers. At least they come in red and black, though – unlike the JET100 and JET200. They are not ITTF approved. It also has a cheap 5-ply blade.

The Killerspin JET300 table tennis paddle is a model of performance and style. Constructed with 5 layers of premium wood and performance Killerspin rubbers, the JET300 table tennis racket provides precise control with increased power for players looking to satisfy their competitive spirit. The combination of medium-thickness blade and 1.8mm rubber (thicker than its predecessors), the JET300 was created for the all-around ping pong player with moderately aggressive play style. The show-stopping red handle with red/black rubber combination makes the JET300 one of the most sophisticated in the Killerspin paddle line. If you are looking for a table tennis racket that will help you take your game from control-mode to attack-mode, the versatile JET300 is for you.

This looks like a pretty solid entry-level bat for new table tennis players.

The Killerspin JET300 paddle is clearly aimed at beginners. It actually has a lot of decent reviews on Amazon – so it must be a fairly decent paddle.

The rubbers on the JET300 are exactly the same as the JET200, except for the change to red/black colors. They have the same 1.8mm sponge. From what I can tell the blade is exactly the same too, just with a different color handle.

Don’t expect this paddle to be fast. The speed is slow, spin is average, and control should be fairly good. The cheap blade will mean it doesn’t feel great to play with, though. If you are used to playing with decent rackets this one will probably disappoint. If you’ve only ever played with cheap paddles this is certainly a step up.

I find it a bit of a joke that this paddle is $10 more than the JET200 when they are identical. I would say just buy the JET200, but if you want red and black rubbers the JET200 is no good for you.

If you are thinking about buying a Killerspin JET300 table tennis racket I would personally recommend going for the Palio Expert 2 instead. The both cost $40 but the Palio CJ8000 rubbers used on this racket are a million times better than the Killerspin ones.

The wooden Palio Expert 2 blade is also much better quality and more similar to the professional blades you can buy individually. If you were to compare the Killerspin JET300 to the Palio Expert 2 side-by-side you would immediately be able to notice the difference between the two rackets. The Palio Expert 2 simply feels a lot better to play with.

You can buy the Killerspin JET300 from Amazon or Megaspin – although, I wouldn’t recommend it.

Have you used the Killerspin JET300 racket yourself? What did you think of it? Please share your experiences and leave a review below in the comments.